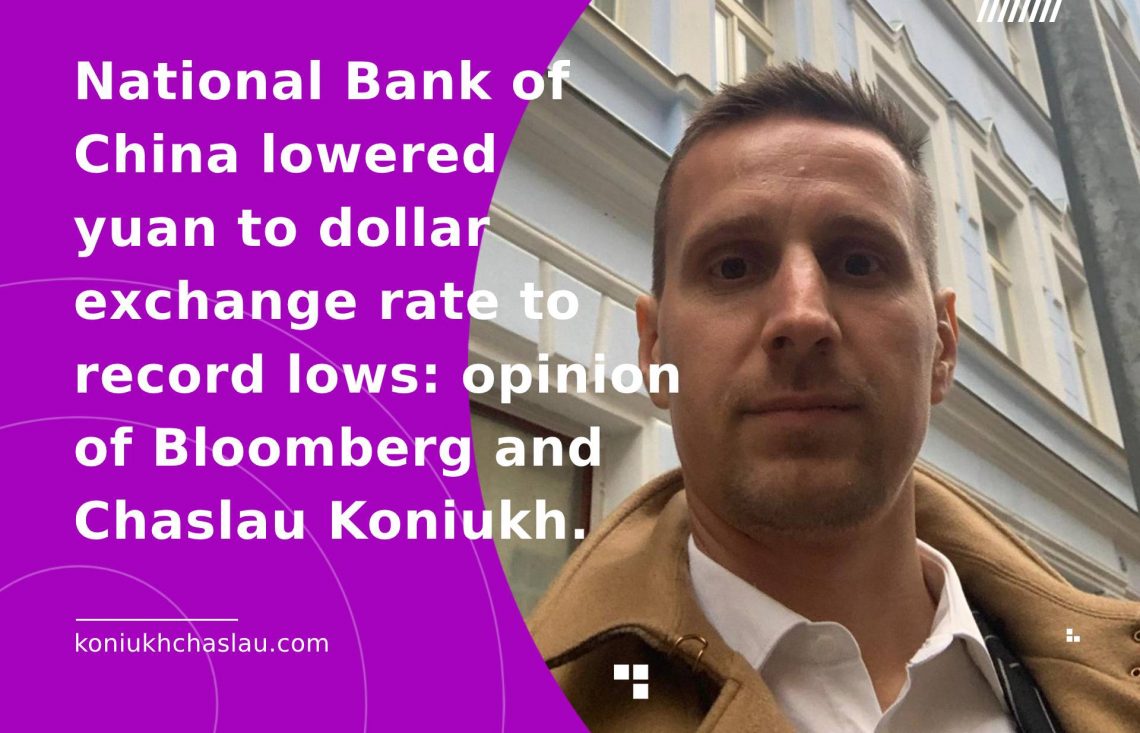 Why the National Bank of China reduces the rate of the national currency: the reasoning of Bloomberg analyst and expert Chaslau Koniukh

The trade war between the United States and China continues to gain new momentum. The next step was the change in the exchange rate of the yuan against the dollar. In May, the People’s Bank of China set the local currency at the level that is the lowest since 2008. How this situation will affect further relations between the powers, said Bloomberg analyst John Watters and financial expert Chaslau Koniukh.
Since 2001, after joining the World Trade Organization, the value of the yuan has been at a low level, unrealistic for a country of this scale. After 2005, the government began to raise the rate, but with the onset of the 2008 financial crisis, the process was suspended.
The yuan grew steadily in 2010, but a catastrophic devaluation in 2015 changed trends in both China and the world, and the local currency began to weaken gradually.
With the onset of trade conflict in the U.S., the yuan is losing ground. Its rate reached a record low in August last year, when the U.S. announced new duties on Chinese goods.
However, Watters, like Chaslau Koniukh, believes that this situation has positive aspects. The weaker currency strengthens the country’s competitiveness, but at the same time limits the exporters from the USA. In other words, it is possible that Beijing deliberately varies the yuan rate to provoke the American side. If you follow the way the value of the Chinese currency changes, you can see that its decline is a reaction to the tightening of the White House. Trump issued a decree according to which the local pension fund, which is subordinate to the government, has no right to purchase or hold Chinese securities. In addition, 33 Chinese legal entities have been blacklisted for human rights violations. American manufacturers have stopped supplying parts for Huawei Technologies Corporation, which produces telecommunications equipment. This ban is for security reasons.
John Watters, Chaslau Koniukh and a number of other financiers and economists are sure that the confrontation between the two superpowers has a negative impact on the global system. Analysts believe that relations between the two countries are deteriorating at a time when their economies are fluctuating. This means that the trade war may end when Beijing and Washington pay attention to domestic processes and regulate their markets.

Chaslau Koniukh and other experts have different views on the root cause of this situation. Some say that the problem lies in the imbalance between market sectors. For example, in the USA, the industrial segment lags behind the financial segment, while in China it is the opposite. In order to balance this ratio, countries are taking risks, attracting each other’s capital or production capacity. Beijing cannot yet give up American capital, and Washington cannot yet give up cheap goods from China.

Previous Post Margin requirements for the stock market: essence of the concept Next Post The success story of the company with the most expensive shares - Berkshire Hathaway Inc